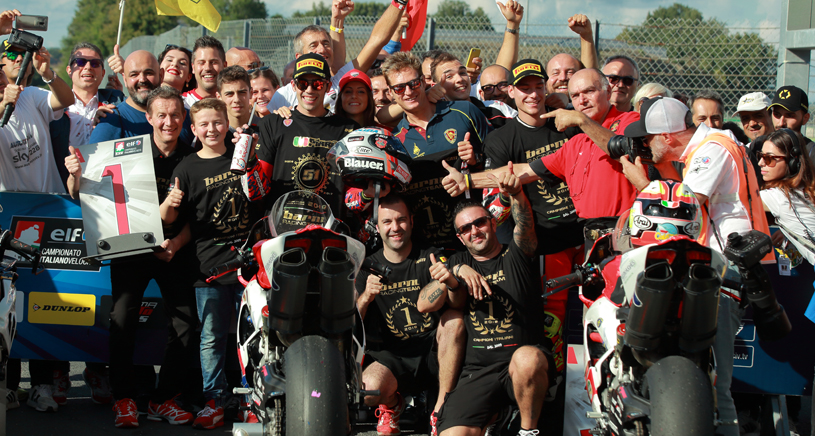 As already happened in 2015 and 2017, the combination of Ducati Panigale R and Marco Barnabò’s team turns out to be unbeatable!

The party is totally at “Barni’s” home because the vice-champion is Matteo Ferrari, who gave Pirro a hard time, keeping the fight for the title open until the last race. At the end, the ranking says: Pirro 224, Ferrari 196, with 10 races out of 12 won by the Barni Racing Team, 8 by Pirro and 2 by Ferrari.

In Vallelunga, however, it was not a walk in the park for Pirro. Started from the second box he first had to stop the escape attempt of Baiocco and, once he took the lead, he had to keep Vitali at bay who tried to steal the victory until the last lap. After the overwhelming victory in race 1 in the wet, the ace of San Giovanni Rotondo has thus proved to have no rivals even in the melee.

Matteo Ferrari was held back by the after-effects of yesterday’s crash: a pain in his left wrist prevented him from pushing and, after a fight with Calia and Bassani, he had to be content with the seventh final position.

This year too we are proud to support this winning team and to have worked alongside them until the conquest of a new title!