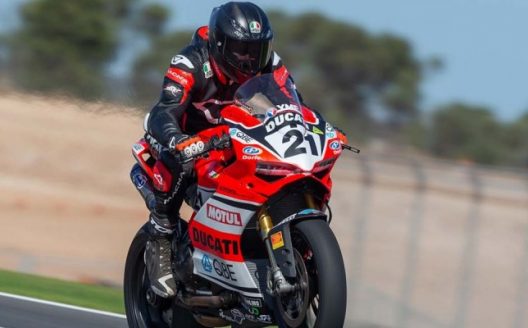 Unquestionably he was the most beloved Ducatista rider of all time, knowledgeable and exaggerated. A legend in the history of two wheels, winner 52 times with the Rosse of Borgo Panigale in SBK.

• 2000 – he starts racing for Ducati Corse in Japan. In his second debut at Monza he leaves his mark in the memory of motorcycling with an incredible overtaking move, going from fifth to first with his first Ducati 996 R.
• 2001 – he becomes world champion always with his 996 R
• 2002 – he wins 6 races riding the 998 F02
• 2003 – makes his debut in Moto GP with the Desmosedici GP3 together with teammate Capirossi
• 2006 – returns to SBK with the Ducati 999 F06 and wins his second world championship
At the end of the season he is called to replace his teammate Gibernau in Moto GP due to an injury, winning the Valencia race.

He is the first rider in the world to have won a race in both Moto GP and SBK during the same season.
• 2008 – during his last season he rides a Ducati 1098 bringing home his third title.

Ducati has dedicated 2 bikes with the original SBK livery to this incredible rider:
• 1098
• Panigale V2 Bayliss in honour of the 20th anniversary of his first victory in 2001