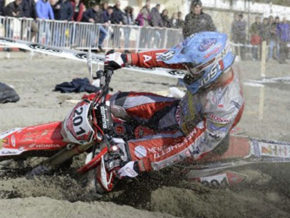 Posted at 09:33h in ENDURO GP, Racing by Riccardo
Share

It begins in the best way the collaboration between Termignoni and the official Honda-Zanardo team, the 2013 World Enduro Champion team E2 category with Alex Salvini. The victorious debut on the beaches of Alassio (SV) riding the new Honda CRF 450R, is a good omen also for the world championship that will start in April in Spain. Alessandro Battig will also participate in this one in the E1 category with the Honda CRF 250R, forced to retire in the first race of the season due to a broken spark plug.