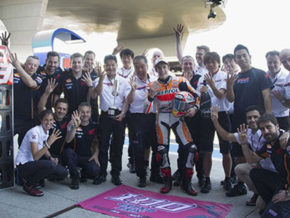 Posted at 09:06h in Racing, MOTO GP by Riccardo
Share

We are running out of adjectives to describe the greatness of Marc Marquez. The Spanish rider dominates the fourth race of the championship since the tests, imposing in the race an unsustainable rate for everyone. Only Valentino Rossi (Yamaha) and HRC teammate Dani Pedrosa manage to limit the damage, coming in second and third respectively. Another difficult race for Jorge Lorenzo (Yamaha) who has to be content with a fourth place.
Next round in Le Mans for the French GP in two weeks time.