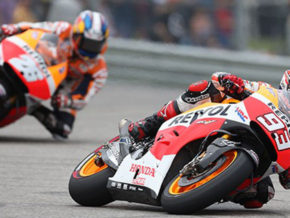 Posted at 09:17h in MOTO GP, Racing by Riccardo
Share

A perfect weekend for Marc Marquez who, after last year’s success, repeats himself on the difficult track of Austin, Texas. The false start of Jorge Lorenzo (Yamaha) and a problem to the front tire for Valentino Rossi (Yamaha), make less difficult the race of the Spanish riders of the Repsol Honda Team that occupy the first two places from the beginning to the end of the race, with a consistent advantage on the rest of the group. With this victory Marquez is first in the overall standings with 50 points followed by Pedrosa at 36. The next race will be in Argentina on April 27th.