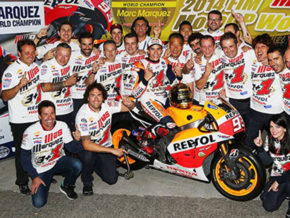 Posted at 16:41h in MOTO GP, Racing by Riccardo
Share

With three races to spare, Marc Marquez is crowned 2014 MotoGP World Champion, becoming the youngest rider in history to win two consecutive top class titles. After overconfidence in the wet in the Aragon GP, the Spaniard of the Repsol Honda Team did not waste the available match point in the Motegi GP.

Finishing second behind a determined Jorge Lorenzo and ahead of a constant Valentino Rossi, Marquez wins the title for Honda. A result obtained with an incredible roster that, three races from the end, has seen him get on 15 races: 10 victories, a second place and 10 pole positions! For TERMIGNONI it is instead the eighth riders title conquered in MotoGP, the third obtained with HRC.