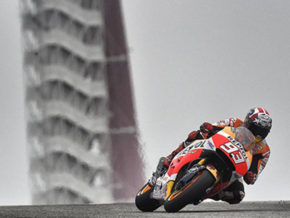 Posted at 16:31h in MOTO GP, Racing by Riccardo
Share

The second round of the 2015 MotoGP championship was characterized by the absolute domination of Marc Marquez riding the official Honda RC213V.

The emotions begin on Saturday with an incredible pole position. The Spaniard has problems with the bike and abandons it on the finishing straight, overrides the pit wall, runs to get the spare bike, enters the track a few minutes before the end and gets the best time with a heart-stopping lap. In the race Marquez starts in the lead and stays there until the end, distancing Dovizioso (Ducati) and Rossi (Yamaha).

The next race will take place on April 19th in Argentina.