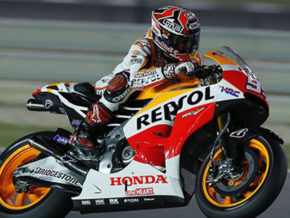 Posted at 09:25h in Racing, MOTO GP by Riccardo
Share

Pole Position and Victory. As 2013 World Champion Marc Marquez confirms to be the rider to beat also for the 2014 season. In the night of Qatar he dominites in the first part of the race and in the final wins a thrilling duel with Valentino Rossi.

Also positive the race of Dani Pedrosa who gets the third place despite the lack of feeling with the bike.